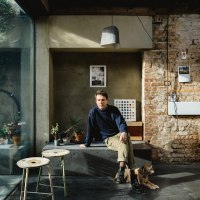 Jonathan Tuckey founded the award-winning London practice in 2000. Jonathan Tuckey Design, now a team of 16, has garnered an international reputation for working with existing buildings and structures. The studio has expertise in combining contemporary design with layers of built heritage, to explore the ways in which old and new can co-exist and elevate one another.

JTD embraces an architecture of change, grounded in an acute awareness of style and context. The considered juxtaposition of contemporary elements with original features creates a dialogue between different eras, and allows buildings to take on new purpose. Reusing existing built stock is the most sustainable approach to the development of our cities and countryside, and fosters a sense of collective heritage.

Projects for individual homes, including Collage House (2011), The Yard, Dulwich (2014) and Egg, Knightsbridge (2015), have led to the development of a clear set of principles and approaches towards working with historic and modern architecture, which has resulted in larger scale commercial commissions, including Wachthuus, Switzerland (2020), Nossenhaus, Switzerland (2016), Gasholders, King’s Cross, London (2018) and Michelberger Hotel, Berlin (2018).

The practice has always been active in the cultural and education sectors, with the refurbishment of Unicorn Primary School (2004) and the development of an after-school activities centre for Wilberforce Primary School (2011). The Southbank Centre Archive in the Royal Festival Hall – a free-standing, self-supporting structure which puts the work of the archivists on public display – is the practice’s most visible contribution to the arts.

A focus on materials, craftsmanship and proportion, and sensitivity to the soulfulness and idiosyncrasies of historic architecture, led to the establishment of Building on the Built in 2016. The programme of exhibitions and talks explores unfamiliar architectural responses to existing structures from around the world and close to home. The series is hosted in the practice’s studio, which is the conversion of a former west London pub into studio, gallery and lecture space (2017).