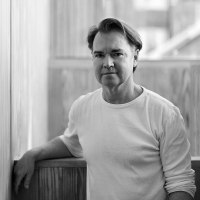 Russell Jones was born in Melbourne in 1964 and raised on Sydney's north shore. His father worked with the influential modern house builders Pettit and Sevitt, so from his childhood, he was always in contact with architecture.

Russell Jones studied architecture at the University of Sydney, completed the design of his first completed project at the age of 18, and graduated in 1988 with the CHL Turner Memorial Prize in Architectural Design. As a student and upon graduation, he worked in the office of Harry Seidler and then traveled to Europe and the United States to study architecture.

Since leaving Australia, Jones has worked and lived in London, Amsterdam, and Copenhagen.  His first studio project was the wooden house on Pearl Beach, north of Sydney, completed in 1985. Russell Jones now lives in London, in a house he designed himself.