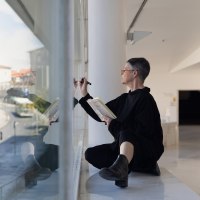 Narelle Jubelin. Born in Sydney in 1960, between 1985 and 1987 Jubelin was co-founder (with Roger Crawford, Tess Horwitz and Paul Saint) of the Sydney-based Firstdraft Gallery, which remains today the longest-running artist-run initiative in Australia.

Jubelin has lived and worked in Madrid since 1996. This particular path has led her to establish a strong relationship with Spain while addressing issues related to Australian history and culture.  She is famous for her petit-point renditions of heavily charged photographs that allow her to explore historical lines that interconnect location and history. She is interested in the way objects travel and translates. Thus, every detail of her work is important; the exhibition, the setting and the site, including the journeys made by the work itself, are one more layer to the reading of the works that acquire meaning with each new exhibition. Her technique slows the process of image assimilation through intricate stitching and unfolding that forces the viewer to engage with the intimacy of scale.

She works with different materials and has exhibited widely in the last twenty years, from Aperto in the 1990 Venice Biennale, the Hayward Gallery, London in 1992, Museo Reina Sofia, Madrid, the Renaissance Society, Chicago in 1994, and the 2009 Sharjah Biennial, United Arab Emirates. She had solo shows at the Art Gallery of New South Wales, Sydney, 2009; Heide Museum, Melbourne, 2009; Casa Encendida, Madrid, 2012 and Gulbenkian Foundation, Lisbon, 2014.

For over two decades, Jubelin has stitched miniature petit points, combining them with objects and textual citations in architectural, photographic and painterly installations.