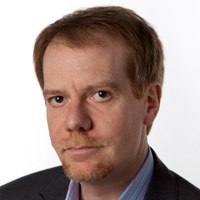 Philip Kennicott is chief art critic of The Washington Post, which he joined in August 1999. He has also been chief classical music critic for the Detroit News and the St. Louis Post-Dispatch, where he also worked for two years as an editorial writer. Before that he was a New York-based editor at Musical America and Chamber Music magazines.

In 2000, Kennicott was a Pulitzer Prize finalist for editorials opposing a concealed-carry gun initiative in Missouri (which failed despite heavy support from gun-rights organizations). In 2006, he was an Emmy Award nominee for a Web-based video journal about democracy and oil money in Azerbaijan. He has also won a Cine Golden Eagle for his video work. In 2010, he won the American Association of Sunday and Feature Editors’ general commentary award. Kennicott now writes extensively about architecture and the intersection of architecture and culture.