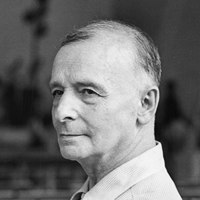 Frederick Kiesler was an architect, a stage designer and an artist. In 1920 he worked with Adolf Loos in Vienna, and it was as a member of the De Stijl group that he began to experiment with innovative stage sets and designs. In 1924 he developed the concept of “infinity”, involving the creation of a space contained within a double-curved concrete spiral shell which – apparently endlessly – offered an interior that could be freely modified. In order to better adapt the concept of the endless house to a stage setting, Kiesler devised a stage consisting of a double spiral interconnecting both elements by means of rings and ramps where the audience was to sit.

Kiesler believed that this “endless stage”, devoid of proscenium or curtain and leaning out towards the spectator, would, by means of the perpetual movement of the walls and imbued by the changing hues of the lighting, encourage ongoing interaction between the spectator and the audience. In 1925, Kiesler designed the Austrian Pavilion for the International Exposition of Modern Industrial and Decorative Arts in Paris. In 1926 he emigrated to the United States of America, where he was to design New York’s Film Guild Cinema in 1929 and the Universal Theater in 1933. Immediately after his arrival to the United States, he was associated to the Surrealists, and in fact he designed the installations for the International Surrealist Exhibition held in Paris in 1947. He also designed Peggy Guggenheim’s “Art of this Century Gallery” in 1957. Between 1959 and 1960 his maquette titled “Endless House” was exhibited at the MoMA. One of his last designs, and a very relevant one, was the Shrine of the Book, which he undertook jointly with Armand Bartos between 1959 and 1965 for the Hebrew University in Jerusalem.