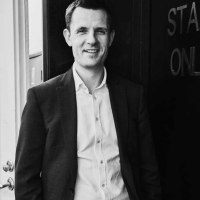 Sergey Kuznetsov. (Russian: Серге́й Оле́гович Кузнецо́в), born 25 July 1977, Moscow. He study in Moscow Architectural Institute, Department of Residential and Public Buildings, Diploma in Architecture, 1995–2001. Moscow architect Sergey Kuznetsov was the partner and the Chief Executive Officer of the architecture workshop “S.P.Project” since 2003. It was one of first Moscow architecture bureau specializing in the creating of three-dimensional graphics along with designing of buildings and complexes of various degree of complexity. In 2006 the architecture workshop “S.P.Project” under the direction of Sergey Kuznetsov entered into the association “SPEECH Tchoban & Kuznetsov”. During existing of the bureau by its designs were realized such projects as Office building on Leninsky prospect, Residential complex “Granatny, 6” or Residential complex “Grunewald”.

In 2010 Sergey Kuznetsov became the co-author of the project and design of exposition “Factory Russia” of the Russian pavilion in XII Architecture Biennale in Venice. In 2012 at the XIII Venice Architecture Biennale he was a co-curator and co-author of design of the exposition “i-city/i-land” of the Russian pavilion. In August 2012, Sergey Kuznetsov was appointed as the Chief Architect of Moscow, the First Deputy Chairman of the Committee for Architecture and Urban Planning of Moscow. During Kuznetsov’s first year in office, over 20 competitions in urban planning projects were held, including several major international competitions that included the design of Zaryadye Park and the National Centre for Contemporary Arts (NCCA). Working closely with Moscow Mayor Sobyanin and the Moscow Government, on the initiative of Sergey Kuznetsov competitions have become regular practice in Moscow as an effective method of urban planning.

Kuznetsov is also the Chairman of the Architectural Council of Moscow – a standing collegial consultative body to the Moscow City Committee for Architecture and Urban Planning. The Council’s work is aimed at making the decisions on key urban projects widely open to the public.