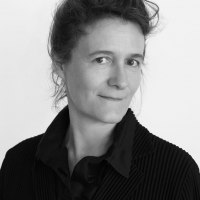 The interior fittings of the National Library of France (1998), the Olympic Tennis Center of Madrid (1999), the Great Extension of the Court of Justice of the European Union in Luxembourg (2008) or the Grand Théâtre des Cordeliers in Albi (2014) are one of the major projects in which she developed the unprecedented use of gigantic metal mesh hangings, as well as unusual luminaries, accurately inserted into each of the architectures as artistic installations. The seating and the furniture are conceived in the same spirit of being one with each of the projects, all of which are very rigorous.

In collaboration with Dominique Perrault, she develops both technical and aesthetic research on the industrial mesh transformed into architectural materials. Examples include the metal drapes of the Pavillon Dufour at the Château de Versailles, refitted in 2016, or the Drape House, a small pavilion designed in 2018 for the Kinare Museum of Contemporary Art in Japan, to accommodate installations or artistic performances. Likewise, in the In 360° tube series, the mesh, as fine as tulle lace, comes in many forms. At the same time, precise, poetic, baroque, and generous through timeless creations, Gaëlle Lauriot-Prévost declines and transposes materials and lights in interventions always created according to each situation. From the calepinage of the coatings to the details of fixations, from the consistency of the light to the sound behavior of the space, his attention is total.