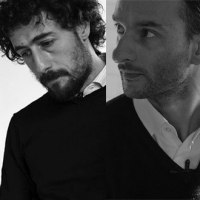 LEAPfactory. It all began when an Italian duo of architects, Stefano Testa and Luca Gentilcore, as well as an enthusiast climber and a skier, decided to bring together their two souls: nature and inventiveness, technology and beauty, mountains and architecture. Through its evolution, LEAPfactory has remained committed to its roots as a mountaineer - architects driven company, always used to push its boundaries further. The goal: to realize a new way of building, according to the environment and the future.

Stefano Testa. Founder. Milan, 1966. Architect with a PhD in Interior Design. Stefano has taught Interior Design and Architecture and Urban Design at the School of Architecture of the Politecnico di Milano, and Industrial Design at the New Academy of Fine Arts (NABA) in Milan. Co-holder of Cliostraat, a multidisciplinary design office inclined to research and experimentation based in Turin since 1996 (www.cliostraat.com). He founded LEAPfactory to explore the contamination among his two souls: architecture design and mountain. Exponent of the pioneering season of the rock climbing and later sports climbing, climbing teacher and federal instructor, Stefano still continues to tighten handholds, not despising intrusions in different mountaineering disciplines.