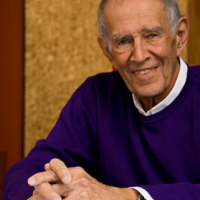 Ricardo Legorreta was one of Mexico’s most significant architect (1931-2011).  He combined the traditions of Western modernism with the building culture of his native country.  Vibrant color, geometric shapes, fountains, light-filled spaces, and intimate courtyards are hallmarks of his style.  With more than 100 design projects to his name he has created a diverse body of work in Mexico and abroad.

Legorreta was born in 1931 in Mexico City, where he studied architecture. After a partnership with José Villagrán, he set up his own practice.  An early building - the Camino Real Hotel Mexico City (1968) – is one of his favorites because he says it helped him discover his Mexican roots.

He went on to design Montalban House in Los Angeles (1985), the Museum of Contemporary Art in Monterrey (1991) the Metropolitan Cathedral of Managua (1993), Pershing Square in Los Angeles (1993), Carnegie Mellon College of Business & Computer Science in Qatar (2009), Georgetown School of Foreign Services in Qatar (2011), and many other public and private buildings, and urban spaces.  Legorreta now works with his youngest son, Victor. It’s a collaboration he’s particularly proud of.  He will be the first Mexican artist to receive the Praemium Imperiale.