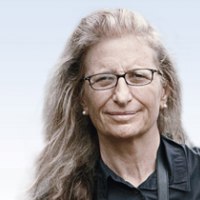 Annie Leibovitz. Born in Waterbury (Connecticut, USA) on 2nd October 1949, Anna-Lou “Annie” Leibovitz studied painting at the San Francisco Art Institute at the same time as attending evening classes in photography. Before finishing her studies, she started working for Rolling Stone in 1970, where she was to become head of photography three years later. In 1983, when her photographs had already illustrated 142 covers, she left this magazine to join in the editorial launch of the new Vanity Fair, where she is currently contributing editor. She has also worked for Vogue since 1998, where she had previously published her photos.

Annie Leibovitz has become one of the most highly respected photographers in cultural and political spheres in the United States. Writers, rock, dance and sport stars, prominent politicians and virtually all the major Hollywood stars have posed for her. Her work is characterized by painstaking, sophisticated staging and by a studied use of lighting that lends her photos a characteristic atmosphere. In 1975, she accompanied The Rolling Stones as official photographer during their concert tour. Her images were acclaimed by critics for capturing the essence of the kind of music and atmosphere surrounding her. Some of Leibovitz’s most recognized photos include: the last photo of Richard Nixon as president of the United States, getting into the helicopter as he left the White House; John Lennon naked in a foetal position hugging Yoko Ono, taken only a few hours before the former Beatle was murdered; Whoopi Goldberg in a bathtub full of milk; and the session she shot with Queen Elizabeth II at Buckingham Palace on the occasion of her official visit to the United States in 2007.

Exhibitions of Leibovitz’s photographs have been held in museums and galleries around the world, including the National Portrait Gallery at the Smithsonian Institute in Washington, becoming the first woman and only the second living photographer to exhibit there, the International Center of Photography in New York, the Stedelijk Museum in Amsterdam, the Maison Européenne de la Photographie in Paris, the National Portrait Gallery in London, the Hermitage in St Petersburg and the Pushkin Museum in Moscow. Her work has been published in several books: Annie Leibovitz: Photographs (1983); Annie Leibovitz: Photographs 1970-1990 (1991); Olympic Portraits (1996), showing her work as the official photographer of the US Olympic team for the Games in Atlanta; Women (1999), in collaboration with Susan Sontag –2003 Prince of Asturias Award for Literature –; American Music (2003); A Photographer’s Life, 1990-2005 (2006); Annie Leibovitz at Work (2008); and Pilgrimage (2011).

Commander of the French Order of Arts and Letters, Leibovitz was designated a “Living Legend” by the US Library of Congress in 2000 and has been distinguished with the Barnard College Medal of Distinction, the Infinity Award in Applied Photography from the International Center of Photography (USA, 2009) and the Los Angeles Museum of Contemporary Art Award to Distinguished Women in the Arts (2012), among other distinctions.