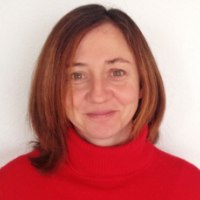 María Loriente López, born in Melilla in 1973. She studied architecture at the Escuela Técnica Superior de Arquitectura of the University of Navarra ETSAUN (1999). Later she returned to Zaragoza where she developed her professional career. She worked as an architect in the Architecture Studio Lalinde-Labarquilla Architects (March 2000-March 2007). Since March 2007 she works as an architect in the Department of Architecture and Urban Planning of the Grupo Progea focusing her work on social housing primarily.