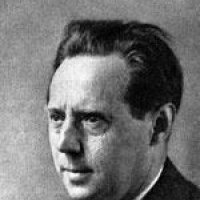 Eduard Ludwig learned the craft of carpentry at his father’s workshop. After his apprenticeship, he attended the Technical College of Applied Arts in Blankenburg (Harz). After studies at the Academy for Applied Arts, he came to the Bauhaus Dessau for the winter semester of 1928/29. Under director Ludwig Mies van der Rohe, he became one of the favourite students. He also completed his diploma with the director. In 1931, Mies gave him the assignment of drawing a design for the renovation of the Borchardt clothing store. The glass building with the filigree grid facade that was just elongated by narrow ceiling edges was never constructed. In 1932, Ludwig drew the design for the Kiosk that protruded from one of the bordering walls of the Dessau Master’s House Settlement. It was to be the only structure that the third and last Bauhaus director realised in Dessau.

Eduard Ludwig remained connected with Mies until 1937, and later established his own office. After the war, he received a professorship at the Academy for Fine Arts, participated in 1946 in the Berlin Plant exhibition with an award-winning group of courtyard houses and created airy and comfortable atrium houses for various sizes of families in Berlin’s Hansa quarter in1957. His Airlift Monument in front of the Berlin-Tempelhof Airport has become an icon. After Ludwig’s accidental death in 1960, the architect Karl Otto completed his design for the Lutheran Martinus Church in Berlin-Tegel in 1967.