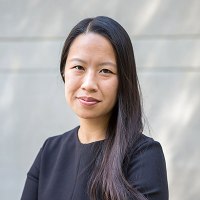 Ann Lui is currently an assistant professor at the School of the Art Institute in Chicago. Also a founding partner of Future Firm, a Chicago-based architecture office, her work focuses on the role of architecture as an infrastructure for discourse. She holds a B.Arch from Cornell University and a SMArchS from MIT’s History, Theory and Criticism program, where her research focused on corporate architecture in the postwar period. Previously, Ann practiced at offices including SOM, Bureau Spectacular, and Morphosis Architects. She was Assistant Editor of OfficeUS Atlas (Lars Muller, 2015), co-edited MIT’s journal Thresholds (MIT SA+P, 2015), and is editing a forthcoming volume with Gediminas Urbonas on the role of architects and artists in the civic realm, titled Public Space? Lost and Found.