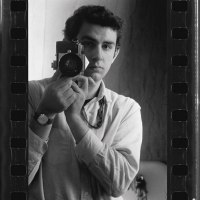 Danny Lyon, He was born in Brooklyn, New York, on March 16, 1942. He studied history and philosophy at the University of Chicago. Since he was young, his life has been marked by social activism. In 1963 he began working as a photographer for the Student Nonviolent Coordination Committee and became involved in the Civil Rights Movement. One of the main promoters of the ‘new documentary / New journalism’ and also one of the representatives of the so-called ‘Concerned photographers’, is considered one of the most influential and original photographers of the 20th century.

He spent several decades touring the US and, as a result of those trips, he developed several photographic works that are a reflection of hidden realities. For more than a year he visited some American prisons where the inmates with the longest sentences in the Western world were held. He showed with pictures how they lived their day to day life and established a relationship with some of them, with whom he shared time and space behind bars.

From 1963 to 1967 Danny Lyon lived with the Chicago Outlaws Motorcycle Club biker gang, portraying the lifestyle of these bikers. From that experience was born The Bikeriders, an iconic photo exhibition, which portrays the life and customs of a group of motorcyclists, with which he tried to neutralize the negative stereotypes associated with them.

His work stands out for the special involvement he demonstrated with the communities and themes he photographed in the United States. As with Robert Frank or William Klein, his series and books, beyond seeking only political compromise, show that authorship is more important than the topic at hand.

In the case of Lyon, moreover, photographic practice as personal learning and the desire to live experiences on the fringes of official history are features that are reflected in the whole of his work, which is part of the main collections in the world, such as those of MoMA and the Art Institute of Chicago.