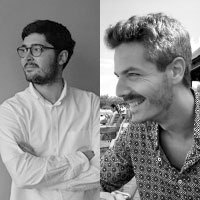 MAAV is an architecture studio founded by Adrián Martínez Muñoz and Guillermo Avanzini Alcibar in 2020. Its work focuses on the realization of public works through competitions, as well as exceptional private commissions. They combine this practice with academic research and teaching.

Adrián Martínez Muñoz (Seville, 1989) studied Architecture at ETSA Sevilla and ENSA Paris La Villette, graduated from the University of Seville in 2014. His final degree project obtained the highest academic distinction and numerous awards in contests. During the last year of his career, he worked in the MGM-Morales de Giles office in Seville. He has collaborated in the Rafael Moneo study in Madrid from 2015 to 2018. In parallel to his professional practice, he maintains a work as a researcher being a member of the Department of History, Theory and Architectural Composition of the ETSA of Seville in 2018. He has recently been selected by the RCC and the US for a research stay at Harvard University Graduate School of Design.

Guillermo Avanzini Alcibar (Bilbao, 1989) studied Architecture at the ETSA in Madrid and the ENSA Paris La Villette, graduated from the Polytechnic University of Madrid in 2015. As a student, he collaborated with various studies such as FRPO, Selgas Cano (in his proposed pavilion for the 2015 Milan Expo) and Moneo Brock. In 2016 he participated in the team formed by IDOM-BIG-BAAS in the development of a proposal for the "Nou Camp Nou" in Barcelona. In 2018 he began a stage in Bilbao in which he collaborated mainly with the Avanzini Palacios studio.