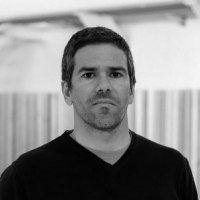 Guilherme Machado Vaz. Born in Porto in 1974, he graduated in Architecture from the Faculty of Architecture of the University of Porto (FAUP) in 1998. Since 2000, he has been working at the Municipality of Matosinhos. Among other projects, he completed a Primary School in Leça da Palmeira, an esplanade at Jardim Basilio Teles in Matosinhos, Custóias Civic Center and Custóias Football Field.

On an individual basis, he built Casa do Vale among other housing projects, namely the project to build 4 houses in Bom Sucesso in Óbidos, as Team Architect for David Chipperfield Architects, and also as author, in the 3rd Phase of Bom Sucesso with 10 houses in band. Finalist of the Iberian Prize of Architecture Enor 2006 with Casa do Vale in Vieira do Minho. Finalist, in 2007, of the Enor and FAD Awards with the Custóias Civic Center. Secil Prize Finalist 2012. Member of the Jury of the 2008 FAD Awards. Lecturer in Milan and Venice at the celebration of the 80th Anniversary of the Italian magazine Casabella.