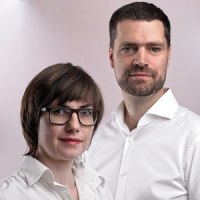 Lena Kleinheinz. In 1995 diploma Fine Arts at the University of Fine Art in Münster and Düsseldorf, Germany. Until 1997 she studied at the University of Fine Art in Berlin, Germany, to study architecture. She made a Master of Science in Architectural History by Bartlett School of Architecture, UCL, England. Between 1999 and 2002 was collaborating on projects of eimatfabrik exhibition, Expo'02, SwitzerlandMfor d-case GmbH, Berlin / Zurich, Germany. Since 2003 Collaborator in the park project of science and technology, Danfoss Universe, Denmark for Kunstraym Gfk, Hamburg, Germany. Until in 2005 starts working as director of "magma architecture".

Martin Ostermann. In 1995 he completed her studies in architecture at the Rheinisch Westfälische Technical University, Aachen, Germany, and Bartlett, UCL, England Graduate design diploma at the Architectural Association in London, England. Since 1997 performs several jobs, working in the esdudio of Libeskind Daniel Architect's Imperial War Museum in Manchester, working in various contests, such as the "World Trade Center", New York Commissioned to the Jewish Museum in San Francisco, and New Communication Building Hongkong. Until 2003 is part of "magma architecure" as Managing director.