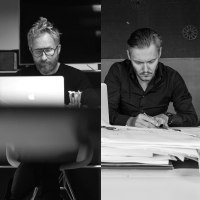 Medusa Group was established in 1997 by architects: Przemo Łukasik and Łukasz Zagała. It is an interdisciplinary design studio involved in projects related to architecture, urban planning, graphic and industrial design. Medusa Group’s projects are prize winners in many competitions and exhibitions in Poland and abroad.

Przemo Łukasik was born in Chorzów, Poland in 1970. He graduated from the Faculty of Architecture at Silesian University of Technology in Gliwice. He also studied at Ecole d’Architecture Paris-Villemin in Paris, France. After graduation he worked in the following offices: P.P. Pabel Architekten in Berlin and the Paris offices of Jean Nouvel Architecture and Odile Decq / Benoit Cornette.

In 1997, together with Łukasz Zagała, he founded Medusa Group  – their own architectural studio. For a year he taught at Ecole Speciale d’Architecture in Paris as a visiting professor. Privately, he is strongly involved in sport – he practices triathlon and is socially active in Silesia (industrial region of Poland).

Lukas Zagała was born in 1972 in Zabrze. He graduated from the Faculty of Architecture at the Silesian University of Technology in Gliwice. After graduation, he worked in the office of P.P. Pabel Architekten in Berlin, Germany and at the Odile Decq / Benoit Cornette studio in Paris, France.

In 1997 along with Przemo Lukasik he established his own practice: medusagroup. He has been a Professor at Silesian University of Technology at Faculty of Architecture for over 10 years. In 2005 he obtained PhD in architecture writing his thesis about “efurbishment of post industrial buildings and objects as important trend in contemporary architecture”.

Privately, he is strongly involved in sports – he practices road cycling and alpine skiing, is interested in classical and jazz music, and plays the piano himself.