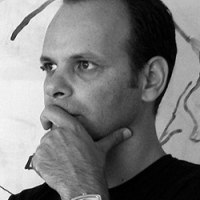 João Mendes Ribeiro, (Coimbra, 1960) graduated from the Faculdade de Arquitectura da Universidade do Porto, where he taught between 1989 and 1991, and also, has been assistant of Professor Architect Fernando Távora between 1991 e 1998. He has been teaching Project in the Departmento de Arquitectura da Faculdade de Ciências e Tecnologia da Universidade de Coimbra since 1991, the same university where in 2009 he took his PhD in Architecture, in Theory and History specialty.

Owns João Mendes Ribeiro Arquitecto Lda office in Coimbra since 1990, where he mainly develops reconversion projects and qualification of the built heritage, such as Laboratório Chimico, Centro de Artes Visuais and Casa da Escrita; instalations for events and expositions; and yet, with great emphasis on designing scenary for the performing arts.

Has participated in a number of national and international exhibitions, including the Portuguese Representation at 9th and 10th International Architecture Exhibition of the Venice Biennial in 2004 and 2006.

His work has been the subject of a variety of publications and he has received several national and international awards, such as the Prémios Architécti 1997 and 2000, Lisbon; Highly Commended, AR awards for emerging architecture, Londres, 2000; the Diogo de Castilho Prize 2003, 2007 and 2011, Coimbra; the Premis FAD 2004, Barcelona; the Premis AICA 2007; Gold Medal for Best Stage Design, 11th International Exhibition of Scenography and Theatre Architecture – Prague Quadrennial 2007, Prage; and the nomination for the European Union Prize for Contemporary Architecture – Mies Van der Rohe Award 2001, 2005 and 2011, Barcelona.

In 2006 he was distinguished with the Comenda da Ordem do Infante D. Henrique by the President of Portugal.