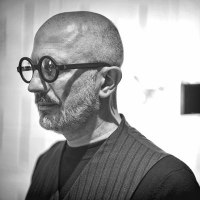 Stefano Meneghetti, born in 1964, is a musician and graphic artist. It has traveled several paths before developing the consciousness of being led, more than anything, to the composition of sound geometries (in this case, electronic) and visuals. Born in Milan, he lives and works in Milan, Venice and Treviso.

He has always worked as a graphic designer and video creator with musicians such as Gary Numan, Franco Battiato, Byetone, Lorenzo Palmeri and many others. He knows the environment of Milanese communication agencies and in 1995, at the dawn of the Internet, he began to build and experiment everything related to web-related graphics. The art director, graphic and media designer has been working in the field of visual communication since 1990. Solid research and experimentation remain the cardinal points of his work.

"Since I was a kid I had a dream, try, as a non-musician, maybe a little naive, to produce my own album. A "collective" project where you can involve friends, musicians, graphic designers, writers... Music has been my friend throughout adolescence, it has helped me create parallel worlds and has fueled my imagination. The Cité Radieuse is the result of this adventure."