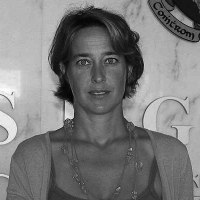 2000-2003, She finished her studies and settled in London collaborating as an architect in the architectural studio of Sir Nicholas Grimshaw. She participates in various projects, such as: (2001) The Eden project, in Conwall, England. (2001) Control Tower, in Farnborough, England.

2015-present, member of the governing board of the architects box. ARQUIA advisor.

2005-present, found her own architecture firm.