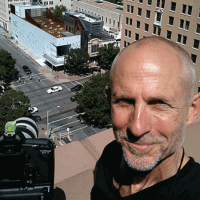 Michael Moran studied biology, painting and sculpture at the University of California. Santa Barbara. His first job after graduation was designing and fabricating, with a small team of artists, a diorama at the Santa Barbara Museum of Natural History. The job entailed studying the near shore ecology of the Southern California coast, and inspired an interest in research and exposition.

Subsequently he received his Master in Architecture degree at the University of California, Los Angeles, and worked in the studio of Frank Gehry, primarily as a model maker. While working for Gehry he became increasingly interested in photography, and left in 1985 to begin an architectural photography practice in New York City.

His photographs have been published in every major architecture magazine worldwide, and he has been commissioned to take photographs for several books, including monographs on Philip Johnson's Glass House, 20th Century Architecture in New York, and the work of Tod Williams and Billie Tsien and Rafael Moneo. He has lived in Brooklyn for 16 years.