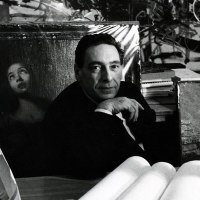 Luigi Moretti graduated in 1930 with a project for a college of classical high education in Villa dei Papi, near Grottaferrata (Rome). Between 1931 and 1934 he worked as assistant to the chair of Vincenzo Fasolo of History and Styles of Architecture and to the chair of Gustavo Giovannoni for Restoration of Monuments, subsequently collaborating with the archaeologist Corrado Ricci as part of the three-year scholarship of Roman studies. Studies for the arrangement of the Trajan’s market area belong to this period.

Moretti resumed a fervent activity not only in the field of architecture but also as a scholar and art critic: in 1950 he founded the magazine “Spazio” and in 1954 in Rome, with Michel Tapié, he created the gallery of the same name.

He receives assignments from private individuals, public administrations and institutions of national importance. He draws up plans for the new urban park coordination plan and represents the Ministry of Public Works in the drafting committee of the Rome inter-municipal plan.

Luigi Moretti received significant awards: in 1957 the Giovanni Gronchi national architecture prize, established by the Accademia Nazionale di San Luca, in 1964 the gold medal of merit of the school, culture and art by the Head of State , receives the prize conferred by the Institute of Architecture of Saint Louis and is nominated honorary member of the American Institut of Architects, he is elected academic of the Accademia Nazionale di San Luca.

In 1957 he founded the Irmou (Institute of Mathematical and Operational Research for Urban Planning) with the intent to carry out his theories on “parametric architecture”, aimed at applying mathematical theories in design. As president of the Institute, he will be called to be part of numerous commissions and will attend conferences and debates on urban issues.

In 1967 Luigi Moretti received the Prix d’Excellence Design Canada and in 1968 the Antonio Feltrinelli prize from the Accademia Nazionale dei Lincei. In 1968 the publisher De Luca published 50 images of architectures by Luigi Moretti, with the preface by Giuseppe Ungaretti.