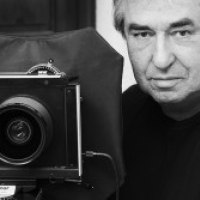 Grant Mudford lives and works in Los Angeles, California. He was born in Sydney, Australia, in 1944. After studying architecture at the University of New South Wales, Sydney, he started a commercial photography studio in that city. From his studio, Mudford did shoots for advertising, fashion, magazine editorial and theater, as well as numerous short films. From 1974-1977, he travelled widely in the United States, under the auspices of a Visual Arts Board Travel Grant from the Australia Council for the Arts. At this time, he settled in Los Angeles. In the ensuing years, Mudford has undertaken editorial assignments for numerous publications, including Architectural Record, Esquire, Architectural Digest, Vanity Fair, Progressive Architecture, the Los Angeles Times, the New York Times and Architecture. He has also participated in more than three-dozen solo and group exhibitions from 1974 to the present.

Regularly providing advice to many in the LA photographic and artistic communities, Mudford is a technical guru, known particularly for his command of point light source printing. As a commercial photographer, he has extensively documented structures by some of the most accomplished American architects including Louis Kahn, Frank Gehry, Rudolph Schindler, Craig Ellwood, and Frank Israel. Embracing both an architect’s overall vision and the subtlety of structural detail, Mudford treats architecture as something made to enhance the eye and the mind. Underlining the classical appeal of correct proportion and line, his photographs analyze the relationships of geometry, demonstrating how shapes and lines define the way we live. Conveying the essence of a building through choice detail, Mudford is a master interpreter of architectural space and light.