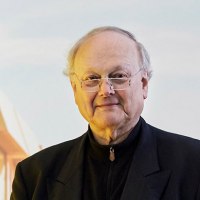 Murcutt was born in London, to Australian parents, in 1936. He grew up in the Morobe district of New Guinea, where he developed an appreciation for simple, primitive architecture. After graduating in 1961 with a degree in architecture from the University of New South Wales, Sydney, Murcutt travelled for two years before returning to Sydney to work in the office of Ancher, Mortlock, Murray and Woolley. He remained with this firm for five years before establishing his own practice in 1970.

Murcutt’s small but exemplary practice is well known for its environmentally sensitive designs with a distinctive Australian character. His buildings, which are principally residential, are a blend of modernist sensibility, local craftsmanship and respect for nature.