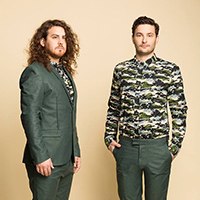 JR JR, formerly known as Dale Earnhardt Jr. Jr., is an American indie-pop band from Detroit, Michigan, consisting of Daniel Zott and Joshua Epstein. Zott and Epstein met each other while playing in other Detroit music projects. They began recording in Zott's basement in Royal Oak, Michigan.

Dale Earnhardt Jr. Jr. was formed in late 2009 by members Joshua Epstein and Daniel Zott. The band also includes drummer Mike Higgins. The band initially began as a basement recording project with few intentions of reaching the public.
2010–11: Horsepower (EP) and It's A Corporate World
2013–present: Patterns (EP) and The Speed of Things

The band's original name, Dale Earnhardt Jr. Jr., was suggested to the pair as a joke. When asked by NASCAR.com's David Caraviello about the name, Zott stated, "The name for us was just a way to identify our crazy new project that had no limitations. People have no idea how we are going to sound, and so it gives them a reason to actually take some time to listen to the music." According to ESPN The Magazine, Dale Earnhardt, Jr. is a fan of Dale Earnhardt Jr. Jr. The band emailed him to assure him they were not making fun of him and sent him a few samples of their music.