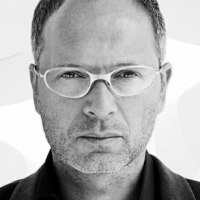 Michael Najjar. (Born Germany, 1966, he lives in Berlín). He is a German artist, adventurer and future astronaut. His work is shown in museums, galleries and biennials around the world.

He works with photography and video. The focus of his work is on key elements of our modern society driven and controlled by computer and information technologies. Najjar, widely seen as a visual futurist, transmutes science, history and philosophy into visions and utopias of future social structures emerging under the impact of cutting-edge technologies. The fusion of realistic elements with fictitious realities is a recurrent hallmark in his work which is usually composed in thematically focused series. Najjar demonstrates the potential of the photographic image, capable of making visible what is normally invisible to the human eye. His work visualizes what very often is beyond the limits of our perception, unveiling what is hidden under the surface of what he calls “telematic society“.