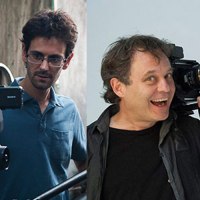 Xavi Campreciós, documentary films director and producer. Graduated from ESCAC, his short documentary Open 24 Hours was awarded the Best National Short Film Documentary at Documenta Madrid 2010. For the last 10 years he has been working between China and Spain, creating all kinds of audiovisual material for Nihao Films, especially about architecture.

Pep Martín, publicist and documentary films director and producer. He worked for more than 20 years as a creative director at Talp Communication. His documentary Ícaro was awarded in 2010 as the Best Documentary by the Academy of Medical Science of Catalunya and Balears, and included in the Official Selection at DocsBarcelona Film Festival 2010. Since 2009 he has directed the documentaries for the EU Prize for Contemporary Architecture – Mies van der Rohe Award. For the las 5 years he has created all kinds of audiovisual material for Nihao Films.