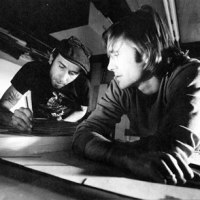 Benjamin Ball grew up in Colorado and Iowa where his mother's involvement in theatre proved influential. While studying for his degree at the Southern California Institute of Architecture, Ball logged stints at Gehry Partners and Shirdel Zago Kipnis. Upon graduation, he sought work as a set and production designer for films (including the Matrix series) as well as music videos and commercials with such influential directors as Mark Romanek and Tony Scott. His experience ranges from work on the Disney Concert Hall and small residential commissions for boutique firms to complex medical structures and event design. In his current collaboration with Gaston Nogues, Ball is exploring the intersection of architecture, art and product design through physical modeling and the use of digital and more traditional forms of production.

Gaston Nogues was born and raised in Buenos Aires before moving to Los Angeles at age 12. Frequently accompanying his father to his job as an aerospace engineer, Nogues acquired a fascination with the hands-on process of building. An honors graduate in architecture from SCI-Arc, he moved directly from school into a position at Gehry Partners where he worked in product design and production and became a specialist in creative fabrication. He remained there until 2005 except for a one-year stint in 1996 as an assistant curator at a fine arts publishing house, Gemini GEL. In his current collaboration with Benjamin Ball, Nogues is focused on fabricating what they visualize; on process as it relates to the built object. In his spare time, Nogues builds custom automobiles.

BALL-NOGUES STUDIO. In 2007, the Studio was the winner of the Museum of Modern Arts PS1 Young Architects Program Competition. Recently, their work became part of the permanent collection of MoMA. In 2011 they were one of the Architectural League of New York's Emerging Voices. The studio is currently working on permanent public commissions for Los Angeles World Airports; the City of West Hollywood; the City of Edmonton, Alberta; the County of San Diego; Nashville Music City Center; as well as Dallas Love Field Airport.