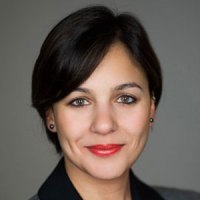 Born in Germany, Stuttgart, Deniz Ova graduated from the University of Stuttgart in Political Science and Linguistics. After working as an assistant director in several theatre productions at the Stuttgart State and City Theatre, she started to work for the management and organisation of festival events in Stuttgart. Her first hospitality management was during the Şimdi Stuttgart festival in 2005 which brought her in touch with the Istanbul Foundation for Culture and Arts (İKSV).

In 2007 she moved to Istanbul to lead the international projects department of İKSV and since then she has developed and organised the festivals and events of İKSV in European cities. (Co-productions for the 400th anniversary celebrations of diplomatic relations between the Netherlands and Turkey, 2012; Şimdi Now Sweden and Denmark, 2011; Anna Lindh Foundation Head of Network Turkey co-coordination and events; Spot On: Turkey Now, Vienna 2009; Turkey at one Glance. Excerpts from Life and Culture, Vienna 2008, the Frankfurt Book Fair Guest of Honour, Turkey Department of Music and Performing Arts, 2008). Besides the festivals she coordinates the Pavilion of Turkey at the Art Exhibition of the Venice Biennale and the artist residency studio “Turquie” at Cite International des Arts. In 2009 Deniz Ova was appointed to write with Görgün Taner and Deniz Unsal a critical report on the Arts and Culture scene in Amsterdam following the nomination of Görgün Taner as Art Advisor for the Amsterdam City Council.