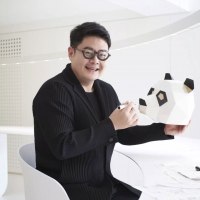 PANDA Design Co., Ltd., which is jointly founded by Lin and the post-80s representative of space design, Cui Shu, is a team committed to space design for children. They focus on designs of children’s commercial space including kindergarten, parent-child restaurant, library, playground, etc.

Lin Jiacheng, who was born in 1984 in Fujian, is an interior designer. His lovely and honest image makes the media call him "panda daddy" affectionately. He is both head of Zhangzhou Mingju Decoration Design Co., Ltd. and co-sponsor of PANDA brand. As a post-80s master in the field of space design for children, he is the designer of AYOU CULTURE, which is the most influential brand of China's Preschool Education. Moreover, he is the first designer to integrate the parenting philosophy of Professor Wassilios Emmanuel Fthenakis, who is known as "Father of Early Educa-tion in German", into Chinese children's space design, helping AYOU win the praise of the indus-try in China and Germany.