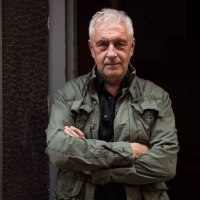 Mario Pasqualotto born in Barcelona 1953, is an artist of wide-ranging interests: his creative activity encompasses many different fields of the plastic arts, including installations -performance- environments, sculpture, sculpture-painting, jewellery and the graphic arts.

Mario works mainly from his studio in Barcelona, which he considers his base. He also regularly spends seasons in Plainfield, New Jersey (US) and has worked in other locations in Spain and the USA, as well as in Italy and Germany. He first exhibited his work in Italy and Spain in 1975, with subsequent exhibitions in various European cities. See his currículum vitae on this site for further details of exhibitions as well as photographs of his works.

Pasqualotto usually works in series and each project involves the accumulation of large amounts of materials. In a lengthy process of selection and elimination are distilled into the final form.