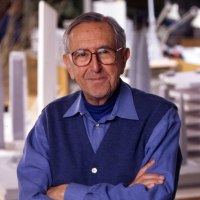 César Pelli (b. October 12, 1926, San Miguel de Tucumán, Argentina – July 19, 2019, Connecticut, USA) was an Argentine American architect who designed some of the world's tallest buildings and other major urban landmarks. Some of his most notable contributions included the Petronas Towers in Kuala Lumpur and the World Financial Center in New York City. The American Institute of Architects named him one of the ten most influential living American architects in 1991 and awarded him the AIA Gold Medal in 1995. In 2008, the Council on Tall Buildings and Urban Habitat presented him with The Lynn S. Beedle Lifetime Achievement Award.

Cesar Pelli  earned a Diploma in Architecture from the University of Tucumán, Argentina. He first worked in the offices of Eero Saarinen, serving as Project Designer for several buildings, including the TWA Terminal at JFK Airport in New York and Morse and Stiles Colleges at Yale University. After this apprenticeship, he was Director of Design at DMJM and, later, Partner for Design at Gruen Associates, both in Los Angeles. Throughout these years, he designed several award-winning projects, including the San Bernardino City Hall in San Bernardino, California, the Pacific Design Center in Los Angeles, California, and the United States Embassy in Tokyo, Japan.

In 1977, Mr. Pelli became Dean of Yale University’s School of Architecture and founded Cesar Pelli & Associates. He resigned his post as Dean in 1984, but continues to lecture on architecture. Since the firm’s establishment, Mr. Pelli worked with the principals to originate and direct the design of each project. In 2005, the firm was renamed Pelli Clarke Pelli Architects in recognition of the increased role of the firm’s principals.

Pelli avoided formalistic preconceptions in his designs. He believes that buildings should be responsible citizens, and the aesthetic qualities of a building should grow from the specific characteristics of each project, such as its location, construction technology, and purpose. In search of the most appropriate response to each project, his designs have covered a wide range of solutions and materials.

Pelli wrote extensively on architectural issues. In 1999, he wrote Observations for Young Architects, edited by The Monacelli Press. His work has been widely published and exhibited, including nine books and several issues of professional journals dedicated to his designs and theories. He has received 13 Honorary Degrees, over 300 awards for design excellence, and is a fellow of the American Institute of Architects, a member of the American Academy of Arts and Letters, the National Academy of Design, the International Academy of Architecture, and of l’Academie d’Architecture de France.

In 1995, the American Institute of Architects awarded Mr. Pelli the Gold Medal in recognition of a lifetime of distinguished achievement in architecture. In 2004, Mr. Pelli was awarded the Aga Khan Award for Architecture for the design of the Petronas Towers, Kuala Lumpur, Malaysia.