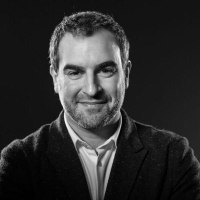 Daniel Perlin is an artist and designer who believes in listening as a strategy for good design. Daniel got his start making work with things that make sound such as music, film, objects and sometimes spaces. After some years spent in Rio de Janeiro, where he worked in film and made work, he returned to New York where he attended NYU’s ITP program and the Whitney Independent Study program. During that time he started Perlin Studios, an experience and sound design studio in New York .

Daniel has had the privilege of making things that cross many disciplines including sounds, interactive designs, objects, installations and performances. Recent work has included a solo performance at MoMA for the Lygia Clark Exhibition, an installation for the Costa Rica Pavillion in the Venice Biennial of Architecture, interactive work for Toyota’s Hydrogen Fuel Cell Vehicle and a kinetic speaker in São Paulo.

He has worked with such people, places and things as Google, Vito Acconci, Maya Lin, Errol Morris, Todd Solondz, IBM, Toyota, Domus Magazine, Under-Armour, The Whitney Museum of American Art, PS1 the Cooper Hewitt and The New Museums. In 2015 Daniel was also an artist fellow at the Center for Transformative Media at Parsons, a graduate program in media and design.
Currently, Daniel is the Principal at Perlin Studios based in Brooklyn, New York, a mentor the New Museum’s incubator New Inc., and an adjunct professor at New York University