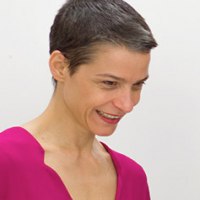 Artist Ana Prvački is a theatre and music trained performance and installation artist. Prvački's interdisciplinary work often deals with sound and sensuality. She uses a gently pedagogical and comedic approach and aims for a conceptual practice with a low carbon footprint.

Her work has been included in many international exhibitions including 14th Istanbul Biennial SALTWATER: A Theory of Thought Forms, Istanbul Turkey 2015, Contour Biennial in Mechelen Belgium 2015, dOCUMENTA 13 2012, Sydney Biennial 2007, Singapore Biennial 2006, and the Turin Triennale 2005.

Her works are included in private and public collection and institutions such as MOCA, LACMA and Castello di Rivoli. Prvački has produced a series of ideas catalogues with the intention of filing and documenting her imagination. Some of the thoughts have been realized as performances, such as “Tent, Quartet, bows and elbows” and “The leap of faith”. Her new catalogue of ideas “Finding comfort in an uncomfortable imagination” is published by ICA Singapore.

Prvački is currently the artist in resident at the de Young Museum in San Francisco.