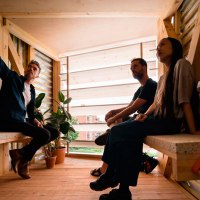 PUP Architects is a London-based design and architecture studio specialised in socially and environmentally conscious architectural projects. PUP is led by ARB registered architects; Theo Molloy, Chloë Leen and Steve Wilkinson. Formed in 2014, PUP has quickly earned a reputation for having a positive design ethos which is critically engaged with the discipline and the world around it.

Prior to founding PUP Theo, Chloe and Steve worked for leading architecture and design companies in Switzerland, Spain and the UK including on projects such as Award winning Gantenbein winery in Switzerland, refurbishment of No.1 Court at Wimbledon Tennis Club in London and the Mailings housing development in Newcastle, Supreme Winner of the Housing Design Awards .

Their practice has gained recognition over the last 3 years through a series of competition wins, commissions and experimental projects where their ideas have been tested and developed.