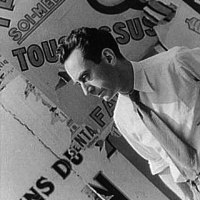 Man Ray (born Emmanuel Radnitzky, August 27, 1890 – November 18, 1976) was an American modernist artist who spent most of his career in Paris, France. He was a significant contributor to the Dada and Surrealist movements, although his ties to each were informal. He produced major works in a variety of media but considered himself a painter above all.

In 1910 , he met Alfred Stieglitz in his famous gallery "291" in the 5th Avenue. There comes into contact with the work of important artists and began frequenting artistic environments.

He had his first contact with Cubism at the Armory Show 1913 "International Exhibition of Modern Art" that took place between 17 February on March 15, 1913, becoming a turning point for American art, had musical Impressionists, Fauves and Cubists.

He had his first solo exhibition in 1915, the year he met Marcel Duchamp, who encouraged him to experiment with other techniques such as collage and assemblage . Creator with Marcel Duchamp's New York Dada, began his artistic career as a painter. Powered by Duchamp, Man Ray moved to Paris in 1921. He joined the Dada movement and then to the Surrealists . Began around 1921 his work in photography closely related to those of Moholy -Nagy , since both handled for processing, various three-dimensional objects and mechanical parts . It is in Paris where he discovers his artistic career is not as productive as photography . It is dedicated to photography and worked as a portraitist of leading figures from the art world and the bourgeoisie. Are portraits where personal expression versus objectivity portrayed image predominates.

It was primarily a studio photographer, Workshop, for manipulation in the laboratory, cropping, enlarging or retouching were essential. His main interest is directed towards extending the visible world. For Man Ray "photographer is a wonderful explorer about aspects that our retina never recorded. (...) I've tried to capture twilight visions, the light too strong, its transience or  slowness of ocular apparatus eluding our senses."

He died in Paris in 1976, his last wife Juliet Browner who he met  in Los Angeles to return to Paris because of the Second World War, immediately creates the MAN RAY Trust.