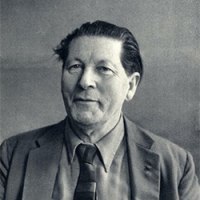 Gerrit Thomas Rietveld (June 24, 1888, Utrecht, The Netherlands - June 25, 1964, Utrecht, The Netherlands) was one of the highest representatives of the Neo-plasticism movement. At the age of eleven he began to work with wood as an apprentice in the carpentry workshop of his father, Johannes Cornelis Rietveld, from whom he gained the knowledge to transform materials at the same time as his perfectionist and rigorous character. In 1906 Gerrit Rietveld continued his career as a designer with the jeweler C.J.A Begger in Utrech, at the same time he attended the night school of arts and crafts where he followed the lessons of the designer and architect P.J. Klaarhamer. After a few years, in 1911, he started his own furniture workshop, which allowed him to free himself of the existing styles and the opportunity to put his ideas into his works. That same year began his studies in architecture, graduating in 1919.

Influenced by his friendship with Theo de Doesburg, which he met in 1919, he joined De Stijl movement, forming part of the artistic movement alongside Piet Mondrian. Through this movement they spread the Neo-plasticism, a discipline that based itself on the use of primary colors (red, blue and yellow, besides the white and the black with their intermediate shades of grey), angular geometric forms and asymmetrical compositions of vertical and horizontal planes. All these fundamentals were synthesized in order, harmony, rigor and simplicity by Gerrit Rietveld, who transmitted in his works his personality, characterized by his originality and personal ethics.

All these aspects are reflected in his artistic production, such as his design of the Red and Blue Chair in 1918, the first expression of his language, where he reduces the object to its meaning and inherent function, erasing any type of ornamentation. He expresses his concern to reduce the furniture to the essential, representing in its works their own essence.

But he did not only do furniture, after his collaboration with Truss Schröder-Schräder, his participation in 1923 in the architecture exhibition LÉffort Moderne in Paris and his collaboration with Vilmos Huzar in the design of the Berlin art exhibition in 1924, together with Mrs. Gertrude A. Schröder-Schräder they designed the Schröder House in Utrech, Holland. This was considered one of the culminating architecture works of the 20th century, being considered one of the most important works of his career, since he involved his skills in design and composition, materializing the Neo-plasticism thought. He began as an architect, having a great attraction for small houses, especially those of a social nature.

In 1928 he joined the International Congress of Modern Architecture, (CIAM). That same year he broke with the De Stijl movement, joining the Nieuwe Zakelijkheid, where he addressed themes of rationalism in architecture, especially the quest for modularity.

Among his most important architectural projects we find the Zeist House, 1932, the Van Gogh Museum in Amsterdam, 1934, the Van Den Doel House, 1958, the Van Slobbe House, 1963 and the Dutch Pavilion at the Venice Biennale.