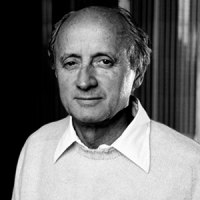 Kevin Roche (b. June 14th, 1922 - d- March 1st, 2019) is an Irish-American architect who has worked across a variety governmental, educational, and corporate structures as well as art museums. Roche graduated in 1945 from University College Dublin. After short-term employment with firms in Dublin and London, he did postgraduate work at the Illinois Institute of Technology in Chicago under Mies van der Rohe.  He worked briefly with the United Nations Planning Office in New York before joining the firm of Eero Saarinen and Associates, and was from 1954 to 1961 the firm’s principal design associate. After Saarinen’s death in 1961, Roche and his future partner, John Dinkeloo completed Saarinen’s remaining projects, including the Dulles International Airport terminal Washington, DC and the Gateway Arch in St. Louis, Missouri (1965).  In 1966 they launched Kevin Roche John Dinkeloo and Associates.

The projects for which Roche Dinkeloo are known include Oakland Museum (1966) the Ford Foundation, New York City (1968), Cummins Engines Headquarters, Columbus, Indiana (1985), Bouygues Headquarters near Paris (1988), Dai Ichi Life, Tokyo (1998), Cuidad Grupo Santander near Madrid (2005), and Convention Centre Dublin (2010). The firm also worked for a number of American universities, designing, for example, the Centre for the Arts at the Wesleyan University (1973) and the NYU Kimmel Centre (2003). Over a forty-year period Kevin Roche was the principal architect for the Metropolitan Museum of Art in New York designing many of its new galleries and extensions. Roche was the recipient of numerous honours, including the 1982 Pritzker Architecture Prize. From 1994 to 1997 he served as president of the American Academy of Arts and Letters.