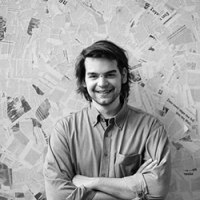 Stefanos Roimpas was born and raised in Athens but quickly moved to the UK and then in France to get his architectural education. He graduated from ESA (École Spéciale d'Architecture-Paris) with distinction and was finalist for the “best thesis of 2013” award. During his time in Paris, he met his most significant and inspiring tutor, Sir Peter Cook. With Peter as personal director he completed his widely celebrated thesis project, “The Lens City” and in 2014, Stefanos is shortlisted finalist for the RIBA Silver Medal and exhibited in RIBA London. Since January 2013 he moved to Rotterdam, where he works as a Junior Architect for OMA.