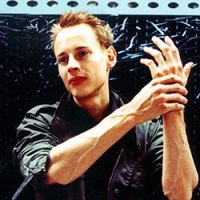 Studio Roosegaarde is the social design lab of artist Daan Roosegaarde with his team of designers and engineers. Roosegaarde has been the focus of exhibitions at Rijksmuseum Amsterdam, Tate Modern, National Museum in Tokyo, Victoria and Albert Museum and winner of numerous international innovation awards. Studio Roosegaarde also has a strong experience with public space commissions for the city of Rotterdam, Singapore, Eindhoven and Stockholm.

Daan Roosegaarde (1979). His Studio Roosegaarde is based in the Netherlands and Shanghai. Roosegaarde is in the top 5 of Sustainable Trouw 100 as most influential Dutch green leader and selected as Talent of the Year 2015 by Kunstweek.

With projects ranging from fashion to architecture his interactive designs such as Dune, Intimacy and Smart Highway are tactile high-tech environments in which viewer and space become one. This connection, established between ideology and technology, results in what Roosegaarde calls 'techno-poetry'.

Selected by Forbes and Good 100 as a creative changemaker, Daan Roosegaarde is a frequent invited lecturer at international conferences such as TED and Design Indaba, and TV media guest at De Wereld Draait Door and CNN.