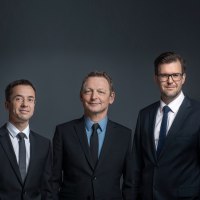 Scapelab is an architectural office established in 2001 by Marko Studen, who graduated from the University of Ljubljana's Faculty of Architecture and GSAPP, Columbia University, New York. For six years he was director of Europan Slovenia, an international housing competition project, and a lecturer at both the Faculty of Architecture in Ljubljana and the University of California. He was an editorial board member of Piranesi Magazine and Art.si Magazine, and a member of national and international competition jury committees. He is a co-editor of European Urbanity: Europan 7 and 8, Austria and Slovenia (Springer Verlag, 2006).

Boris Matic taught at the University of Ljubljana’s School of Architecture, served as an Executive Committee member of the Slovenian Chamber of Architecture, and has published contributions in outlets such as Hise and Mladina. Together with Jernej Sipos, they have been an integral part of Scapelab for more than ten years and joined as owners and partners in 2018. Scapelab was awarded the Piranesi Prize Honorable Mention (Cufar Square, 2005), the Golden Pen Award (Shared Space Slovenska Street, 2015), and the Plecnik Award (Technological Center Eles, 2019), among other national and international awards and commendations.