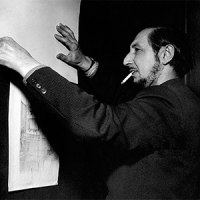 Carlo Scarpa,  was born in Venice in June 2, 1906, he was an Italian intellectual, artist, architect and designer. Its formation takes place in Venice in 1926, where he graduated in architectural design at the Academy of Fine Arts and began teaching at IUAV where he will continue until 1977, always occupying different positions.

In 1927 a collaboration of Carlo Scarpa with Murano glass masters began, was designer for the company Cappellini and BC, where he experienced for four years the quality and creative possibilities of glass as a material. This will be an important precedent for a future collaboration with Venini, where from 1934 to 1947 Scarpa served as artistic director of the company. For Venini, Scarpa participates in the most prestigious international design exhibitions and the Triennale di Milano in 1934, this will give him the title of honor for glass creations.

Since 1948, with the assembly of the retrospective exhibition of Paul Klee, he begins a long and prolific collaboration with the Venice Biennale, where he experiences his great qualities as builder of spaces for art, confirmed by more than 60 museums and exhibitions which he designed.

In 1956 he was awarded the prize for his project for the Olivetti brand.

From 1954 to 1960 he held series of annual conferences for the Fulbright seminar in Rome at the invitation of the American Commission on cultural exchanges with Italy.

In 1967 he won the prize of the President of the Republic for architecture. In 1970 he became member of the Royal British Institute of Design and in 1976 from the Accademia di San Luca in Rome.

A series of solo exhibitions, gave him an opportunity to present their own work in Italy and abroad. Among them we can mention the Museum of Modern Art in New York in 1966, in Venice in 1968, Vicenza, London and Paris in 1974 and Madrid in 1978. In the late sixties his international prestige grows. While the Italian cultural and political climate tends to marginalize, abroad is increasingly known and appreciated because of his intellectual dimension.

He made many trips to North America to deepen his knowledge of the works of Wright and for the assembly of numerous exhibitions. Memorable are the Poetry section in the Italian Pavilion of the Universal Exhibition in Montreal (1967) and the Exhibition of drawings by Erich Mendelsohn in Berkeley and San Francisco in 1969.

He first traveled to Japan in 1969, a country that interested him very much and where, on his second voyage in 1978, he died in an unfortunate accident in Sendai (November 28, 1978). Only after death he will be awarded with an honorary degree in Architecture, ending a long diatribe on the legality of his architectural work in the absence of an appropriate title.