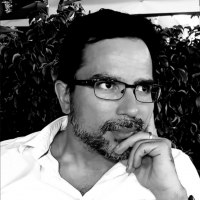 David Serero was born in Grenoble in 1974. Graduate in architecture and urbanism of Columbia University in New York and of the École d’Architecture Paris-Villemin, Prix de Rome 2004, he lived in New York prior to returning to settle in Paris in 2006. His work is characterized by unique and personal research on materials and geometry applied to architectural skins. His project for the Bayeux Media Library attests to his thinking about the use of materials and structure. Here he has employed it to create a highly porous space with ideal conditions of lighting for readers and for experiencing multimedia works.

His projects have been featured in exhibitions in France and abroad and include the Frac d’Orléans, the Pavillon de l’Arsenal, the MOMA, the Architectural League de New York, the Villa Medici in Rome and the Mori Museum in Tokyo. David Serero also teaches and conducts research at several schools, notably the École d’Architecture Paris Val de Seine where he is an associate professor. He is particularly interested in issues regarding structural morphology and high-performance architectural envelopes. He has also taught at Pratt Institute in New York, Columbia University and has many architecture and research workshops in France, Italy, Austria and the United States.