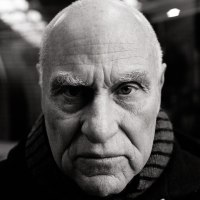 Richard Serra. Born in 1938 in San Francisco, Richard Serra lives and works in New York and on the North Fork of Long Island. Serra attended the University of California, Berkeley before transferring to the University of California, Santa Barbara graduating with a BA in English literature; he then studied painting at Yale University, New Haven, Connecticut completing both a BFA and MFA. He began showing with Leo Castelli in 1968, and his first solo exhibition in New York was held at the Leo Castelli Warehouse the following year. His first solo museum exhibition was held at the Pasadena Art Museum, California, in 1970.

In 2005 The Matter of Time (1994–2005), a series of eight large-scale works, was installed permanently at the Guggenheim Museum Bilbao, Spain. For Monumenta 2008, the major site-specific installation Promenade was shown at the Grand Palais, Paris. Three years later the  large-scale, site-specific sculpture 7 was permanently installed opposite the Museum of Islamic Art in Doha, Qatar. A major traveling retrospective dedicated to Serra’s drawings was presented at the Metropolitan Museum of Art, New York, San Francisco Museum of Modern Art, and the Menil Collection, Houston (the organizing venue), from 2011 to 2012.

In 2014 the Qatar Museums Authority presented a two-venue retrospective survey of Serra’s work, and East-West/West-East (2014) was permanently installed in the Brouq Nature Reserve, Zekreet, Qatar. In 2017 the Museum Wiesbaden, Germany, presented Richard Serra: Props, Films, Early Works; an overview of Serra’s work in film and video was shown at the Kunstmuseum Basel; and recent drawings were featured at the Museum Boijmans Van Beuningen.