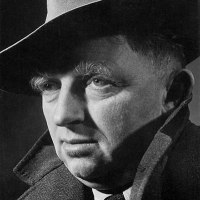 Arieh Sharon (Poland, 1900 - France, 1984). He began his studies as an architect at the German Technical University in Brno, where he was from 1918 to 1920. In 1920 he emigrated to Palestine where he worked as a farmer in Zikhron Ya'aqov. The following year he moved to Kibbutz Gan Shmuel, where he worked as a beekeeper and building farms and small houses. In 1926 he moved to Germany, where he entered as a student at the Bauhaus, the pioneering school that helped forge the rationalist style of architecture. In the German school he was a pupil of Walter Gropius and Hannes Meyer, and between 1929 and 1931 he worked for the latter.

In 1929 Sharon married Gunta Stölzl, textile designer of the Bauhaus, but unfortunately the marriage ended up separating. In 1936 he maintained another relationship, this time with Haya Sankowsky.

From 1930, Sharon won numerous public competitions and was dedicated to the construction of cooperative housing, working-class neighborhoods, public buildings and schools. After his return to Palestine in 1931 he was one of the pioneers of modern architecture in this country, along with other figures such as Zeev Rechter and Dov Karmi. With Rechter and Joseph Neufeld he founded the Circle of Architects and started the publication of the magazine "Building in the Near East".

In the following decade, Sharon was devoted mainly to the planning of Kibbutzim and Moshavim, always under a communal ideal that included collective dining rooms, town houses, assembly halls, cultural centers, etc.

In 1948 he was appointed director of the National Plan Council, in charge of drawing up a national plan for urban planning, to install the thousands of Jewish immigrants from all over the world in several new cities spread throughout the territory. Between 1948 and 1957 twenty-eight new cities were planned, including Beersheba and Ashdod. During 1960, Karminel and Arad were also created.

Between 1954 and 1964 he worked with Benjamin Idelson and, since 1965, with his son Eldar Sharon. From 1954, he carried out his most outstanding works such as the Beilinson medical center in Tel Aviv, the Beersheba Regional Hospital, the Israel Pavilion of the General Exhibition in Brussels, the Yad Vashem in Jerusalem or the headquarters of the Jewish Agency for the Land of Israel in Jerusalem. In addition, in 1968 he drew with David Brutzkus the plan of ordination of the old city of Jerusalem and in 1962 he won the Israel Architecture Prize.