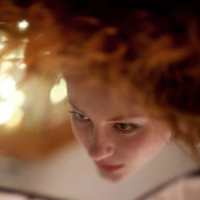 Seanna Sharpe. Born on March 21, 1987 Seanna Sharpe fell in love with flight after an early affaire with Peter Pan, and has ever since been climbing, flying, and falling - in style.

In 2008, after dancing across 26 countries, Sharpe left everything and everyone behind and moved to New York City.

There, she studied Political Philosophy, Metaphor, Fine Art, Production, and Dance at NYU, as well as training 6 days a week at New York Circus Arts. Her first solo art show, "An Octopus of My Own", featured 27 portraits of cephalopods rendered in various mediums, from painting, to sculpture, to performance. That spring, her fashions took to the runway for Eco-Fashion Week, showcasing seven of her Umbrella Dresses, transformed from skeletons in the gutters to haute couture.

Meanwhile, Sharpe was teaching Circus To The People, NYC's first donation-based Aerial Dance Class, at The Trapeze Loft and Silk Cloud Swing - her own invention - at The Skybox and STREB, Brooklyn's revolutionary dedicated Aerial Theatre and Circus Schools. Seanna Sharpe graduated from Gallatin in 2010 with the world's first BA in Circustentialism.

"When I fly, people forget everything they thought they knew about impossible."
- Seanna Sharpe, The New York Times