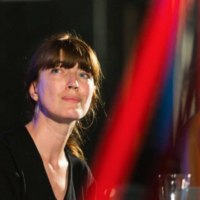 Anastassia Smirnova is a designer and researcher. Scenographer by education Anastassia has been part of many multidisciplinary projects and her competencies range from design and writing to educational and cultural programming.

In 2000-2007, she has been working as a freelance author for professional and popular press and published a guide book for Amsterdam of which almost 200 000 copies were sold. Later on, by invitation of an architect Rem Koolhaas, she joined AMO, a think-tank within the Of ce for Metropolitan Architecture, to conduct the research for the Hermitage Museum Masterplan.

After co-founding SVESMI, Anastassia also became part of the educational team at the Strelka Institute for Media, Architecture and Design in Moscow, where she started teaching alongside Rem Koolhaas, Yuri Grigoryan (Meganom) and David Erixon (Hyper Island). With the latter she has been directing Institute’s education program in 2013-2015.

Recently, she has also curated and has come to be an academic director of an international MA program Advanced Urban Design – a joint initiative of the Graduate School of Urbanism (HSE) and the Strelka Institute.

At SVESMI Anastassia leads preservation projects and is responsible for various research, educational and cultural activities.