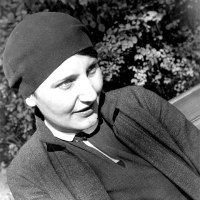 Lotte Stam-Beese (Reisicht, Poland, January 28, 1903 - Krimpen, The Netherlands, November 18, 1988). Architect and urban planner born in the city of Reisicht, which before World War II belonged to Germany and is currently part of Poland. Between 1926 and 1929 she studied at the Bauhaus in Dessau (Germany). She was the first woman to study architecture in this school, with Hannes Meyer and later with Hans Wittwer. Meanwhile, between 1926 and 1928 she devoted himself to photography. The works made in those years can be found in the Museum of Modern Art (MoMA) in New York, the Arthur M. Sackler Museum at Harvard and the Getty Museum in California. In early 1929 Beese had to leave school because of his relationship with the then-married, Hannes Meyer.

After finishing at the Bauhaus, she moved to Berlin. There she began working in the architecture studio of Hugo Häring, to finally finish working in the office of Hannes Meyer in Berlin. She will also work with different architects, such as: Bohuslav Fuchs in Brno, Mart Stam in Siberia, etc.

Between 1929 and 1933 Lotte Stam-Beese will live in different cities: Dessau, Vienna, Berlin, Brno, Prague, Moscow and finally in Kharkiv (Ukraine). In this last city, Lotte starts working with her former Bauhaus partner, Ernst May, in the May Brigades studio designing the new cities of the Soviet Union.

In 1934 she moved to Holland and a year later he began to be part of the avant-garde circles in Amsterdam. She wrote several articles in the journals 8 and Opbouw, talking about subjects such as Dutch art, the Bauhaus work culture or the construction of schools in Russia.

In 1940 she began her studies at the School of Architecture in Amsterdam. Five years later she finished his studies and moved to Rotterdam. There she will begin his activity in the Department of Urbanism, being director between 1946 and 1968. In 1948, begins the project of Pendrecht (Rotterman) in which she defends the neighborhood as an extension of the city and not as an isolated suburb. In 1947 he built the first street without cars in the Netherlands. In addition, she was a professor at the Academy of Architecture and Urban Design in Amsterdam.

Lotte Stam-Beese finally died on November 18, 1988 in Krimpen (The Netherlands).