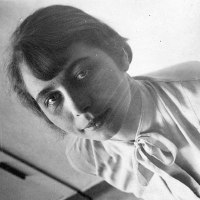 Gunta Stölzl (Munich, 1897 - Switzerland, 1983). Gunta began her studies at the School of Decorative Arts in Munich between 1914 and 1916, studying decorative painting, glass painting, ceramics, art history and style. At 17, she interrupted her studies and started working at the Red Cross as a volunteer nurse of the First World War. Upon her return, she joined the Student Reform Commission, where she had the opportunity to read the "Manifesto of the Bauhaus" written by Walter Gropius. This manifesto was the reason for Gunta to visit Weimar and would like to finally join the Bauhaus as a student. In 1919 she made the preliminary course of the Weimar Bauhaus by Johannes Itten and in 1920 she entered the German school, where she studied for six years. Stölzl trained in the weaving workshop with Georg Muche and attended classes taught by Johannes Itten and Paul Klee.

In 1924, Johannes Itten took Gunta to Zurich to reorganize the structure of the Ontos textile workshops. In 1925, the Bauhaus in Weimar moved to Dessau, and it was at that time that Stölzl became a teacher of the textile workshop thanks to the fact that some groups of students caused her to rise by acclaiming her as a leader. In 1927 she assumed the direction of the section of fabrics without having any teaching experience, with the help of Kart Wanke enhancing only the practical side.

In the new Bauhaus of Dessau, architecture was the most important discipline of the school, so the fabrics had to adapt to the contemporary constuctive style and were used as decoration for the architectural space. For this reason, in this period, the artisan pieces were scarce.

Gunta Stölzl lost her job at the Bauhaus in a similar way as she won it. A group of dissatisfied students with Gunta Stölzl after the separation of the marriage with the Jewish architect Arieh Sharon, supported by teachers sympathetic to the right, launched a campaign against her. Finally, the then director of the school, Mies Van der Rohe, requested his resignation.

In 1931, she moved to Switzerland. In Zurich she teamed up with two former students of the Bauhaus school, Gertrud Preiswerk and Heinrich-Otto Hürlimann, and opened a small craft workshop, S-P-H-Stoffe, which was soon abandoned due to financial problems. Despite the economic and political situation that was at that time so hard, Stölzl managed to carry out a small workshop, S-H-Stoffe until 1937. In that same year, she was awarded the Diplôme Commémoratif of the World Exhibition in Paris. In addition, she participated in several exhibitions and trade fairs, making fabrics for furniture and carpets for different companies and worked for Germanische National Museum in Nuremberg and some architects like Hans Fishli, for whose buildings he made tapestries. During the seventies, she devoted himself solely to the production of Gobelins, which led to an internal fame. Her works are shown in several major museums such as the MoMA in New York or the Victoria and Albert in London.